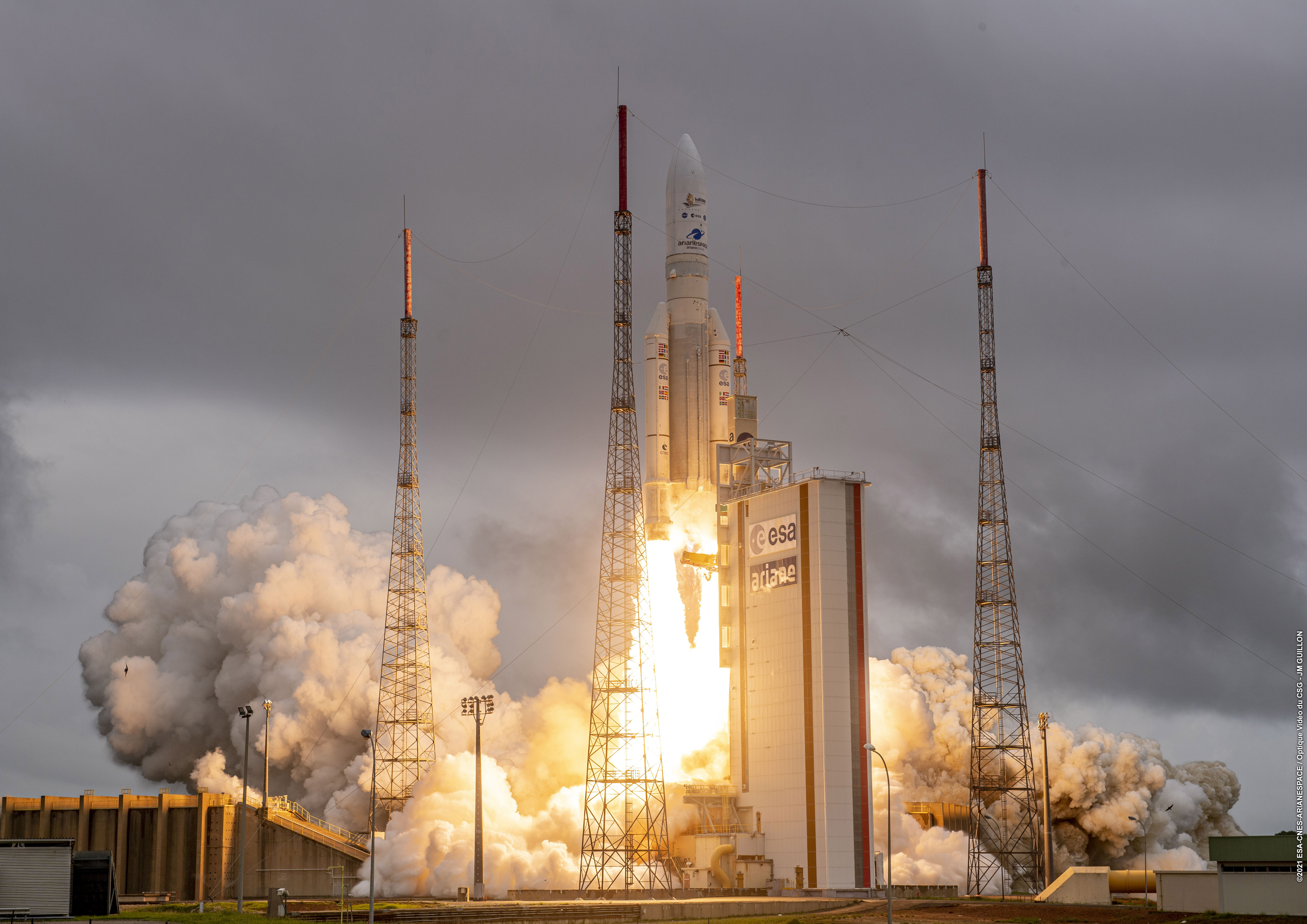 The James Webb Space Telescope lifted off on an Ariane 5 rocket from Europe’s Spaceport in French Guiana, at 13:20 CET on 25 December on its exciting mission to unlock the secrets of the Universe.

Working with partners, ESA was responsible for the development and qualification of Ariane 5 adaptations for the Webb mission and for the procurement of the launch service. ESA’s Ariane 5, manufactured by ArianeGroup, has been in operation since 1996 and has already completed more than 100 launches from Europe’s Spaceport in French Guiana. It is 53 m high and 5.4 m diameter with a mass at liftoff of 780 tonnes.

Ariane 5 was customised to accommodate all the specific requirements of this mission. There are some notable modifications.

Europe’s Spaceport in Kourou, French Guiana, was chosen as the ideal launch site for an extraordinary mission such as Webb. Because it is located near the equator, launch vehicles gain extra performance thanks to a ‘slingshot effect’ due to the speed of Earth’s rotation. An open ocean towards the east offers a launch trajectory away from populated areas. In addition, this region has no risk of cyclones or earthquakes.

ESA owns the Ariane 5 launch complex and works closely with its partners: the French space agency CNES, which operates and maintains the spaceport; Arianespace, providing the launch service; and ArianeGroup and other industrial partners for launch vehicle assembly and launch operations.

Journey to the Launchpad

The Webb launch campaign spanning 70 days involved a team of more than 100 experts hosted at Europe’s Spaceport. For some, the final preparation of Ariane 5 for Webb was the culmination of fifteen years of passionate endeavour. NASA was highly involved, working closely with ESA towards launch.

Webb is large. Though the observatory weighs only six tonnes, it is more than 10.5 m high and almost 4.5 m wide in the folded position. Its shipping container was 30 m long, and with equipment included weighed more than 70 tonnes. Because of this, Webb went to French Guiana by sea, crossing the Panama Canal to dock in Pariacabo harbour in Kourou. Ground equipment arrived by sea and air from around the United States.

The cleanliness requirements were so high that a clean-tent 12 m high and 4.6 m wide was placed over Webb inside the cleanroom itself, purged at all times with extremely pure nitrogen to remove any contamination. Whenever this tent was removed, walls of filters took over and fans were switched on. In addition, the fairing was treated specially to ensure cleanliness. From the moment of liftoff until separation, CNES Launch Range services tracked Ariane 5 from ground stations in Kourou, in Ascension Island (South Atlantic), Natal (Brazil), Libreville (Gabon) and Malindi (Kenya). Immediately after Webb separates from the rocket, ESA's tracking station network, ESTRACK, will follow the Early Orbit Phase operations using its Malindi ground station in collaboration with NASA’s station network. ESTRACK is a network of ground stations in seven countries, able to track spacecraft almost anywhere, even those voyaging deep into our Solar System.

Europe’s Spaceport covers 700 sq km and as a restricted area offers protection to a rare biodiversity of wildlife. It is therefore one of the largest natural protected areas on the Guiana coast.