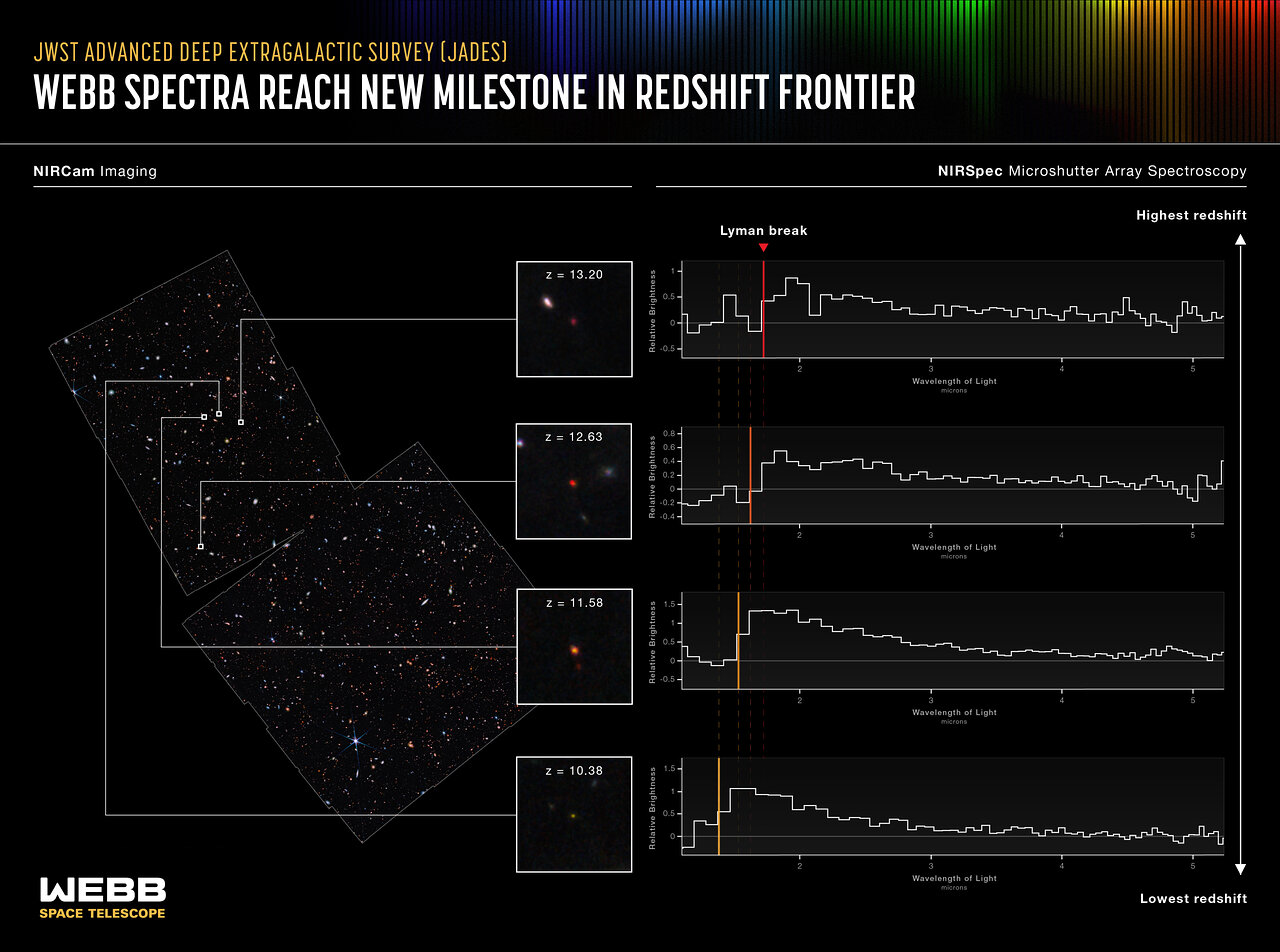 An international team of astronomers has used data from the NASA/ESA/CSA James Webb Space Telescope to report the discovery of the earliest galaxies confirmed to date. The light from these galaxies has taken more than 13.4 billion years to reach us, as these galaxies date back to less than 400 million years after the big bang, when the universe was only 2% of its current age.

Earlier data from Webb had provided candidates for such infant galaxies. Now, these targets have been confirmed by obtaining spectroscopic observations, revealing characteristic and distinctive patterns in the fingerprints of light coming from these incredibly faint galaxies.

“It was crucial to prove that these galaxies do, indeed, inhabit the early universe. It’s very possible for closer galaxies to masquerade as very distant galaxies,” said astronomer and co-author Emma Curtis-Lake from the University of Hertfordshire in the United Kingdom. “Seeing the spectrum revealed as we hoped, confirming these galaxies as being at the true edge of our view, some further away than Hubble could see! It is a tremendously exciting achievement for the mission.”

The observations resulted from a collaboration of scientists who led the development of two of the instruments on board Webb, the Near-Infrared Camera (NIRCam) and the Near-Infrared Spectrograph (NIRSpec). The investigation of the faintest and earliest galaxies was the leading motivation behind the concepts for these instruments. In 2015 the instrument teams joined together to propose the JWST Advanced Deep Extragalactic Survey (JADES), an ambitious program that has been allocated just over one month of the telescope’s time spread over two years, and is designed to provide a view of the early universe unprecedented in both depth and detail. JADES is an international collaboration of more than eighty astronomers from ten countries. “These results are the culmination of why the NIRCam and NIRSpec teams joined together to execute this observing program,” shared co-author Marcia Rieke, NIRCam principal investigator, of the University of Arizona in Tucson.

The first round of JADES observations focused on the area in and around the NASA/ESA Hubble Space Telescope’s Ultra Deep Field. For over 20 years, this small patch of sky has been the target of nearly all large telescopes, building an exceptionally sensitive data set spanning the full electromagnetic spectrum. Now Webb is adding its unique view, providing the faintest and sharpest images yet obtained.

The JADES program began with NIRCam, using over 10 days of mission time to observe the field in nine different infrared colors, and producing exquisite images of the sky. The region is 15 times larger than the deepest infrared images produced by the Hubble Space Telescope, yet is even deeper and sharper at these wavelengths. The image is only the size a human appears when viewed from a mile away. However, it teems with nearly 100,000 galaxies, each caught at some moment in their history, billions of years in the past.

“For the first time, we have discovered galaxies only 350 million years after the big bang, and we can be absolutely confident of their fantastic distances,” shared co-author Brant Robertson from the University of California Santa Cruz, a member of the NIRCam science team. “To find these early galaxies in such stunningly beautiful images is a special experience.”

From these images, the galaxies in the early universe can be distinguished by a tell-tale aspect of their multi-wavelength colours. Light is stretched in wavelength as the universe expands, and the light from these youngest galaxies has been stretched by a factor of up to 14. Astronomers search for faint galaxies that are visible in the infrared but whose light abruptly cuts off at a critical wavelength. The location of the cutoff within each galaxy’s spectrum is shifted by the universe’s expansion. The JADES team scoured the Webb images looking for these distinctive candidates.

They then used the NIRSpec instrument, for a single observation period spanning three days totaling 28 hours of data collection. The team collected the light from 250 faint galaxies, allowing astronomers to study the patterns imprinted on the spectrum by the atoms in each galaxy. This yielded a precise measurement of each galaxy’s redshift and revealed the properties of the gas and stars in these galaxies.

“These are by far the faintest infrared spectra ever taken,” said astronomer and co-author Stefano Carniani from Scuola Normale Superiore in Italy. “They reveal what we hoped to see: a precise measurement of the cutoff wavelength of light due to the scattering of intergalactic hydrogen.”

Four of the galaxies studied are particularly special, as they were revealed to be at an unprecedentedly early epoch. The results provided spectroscopic confirmation that these four galaxies lie at redshifts above 10, including two at redshift 13. This corresponds to a time when the universe was approximately 330 million years old, setting a new frontier in the search for far-flung galaxies. These galaxies are extremely faint because of their great distance from us. Astronomers can now explore their properties, thanks to Webb’s exquisite sensitivity.

Astronomer and co-author Sandro Tacchella from the University of Cambridge in the United Kingdom explained, “It is hard to understand galaxies without understanding the initial periods of their development. Much as with humans, so much of what happens later depends on the impact of these early generations of stars. So many questions about galaxies have been waiting for the transformative opportunity of Webb, and we're thrilled to be able to play a part in revealing this story."

JADES will continue in 2023 with a detailed study of another field, this one centered on the iconic Hubble Deep Field, and then return to the Ultra Deep Field for another round of deep imaging and spectroscopy. Many more candidates in the field await spectroscopic investigation, with hundreds of hours of additional time already approved.

[Image Description: An infographic titled “JWST Advanced Deep Extragalactic Survey, JADES; Webb Spectra Read New Milestone in Redshift Frontier; NIRCam Imaging and NIRSpec Microshutter Array Spectroscopy.” At left is a NIRCam image of the field, which is filled with galaxies of different colors, shapes, and sizes. To the right are four line graphs corresponding to four highlighted galaxies. They show the shift in the position of a spectral feature called the Lyman break to longer wavelengths as the redshift increases.]