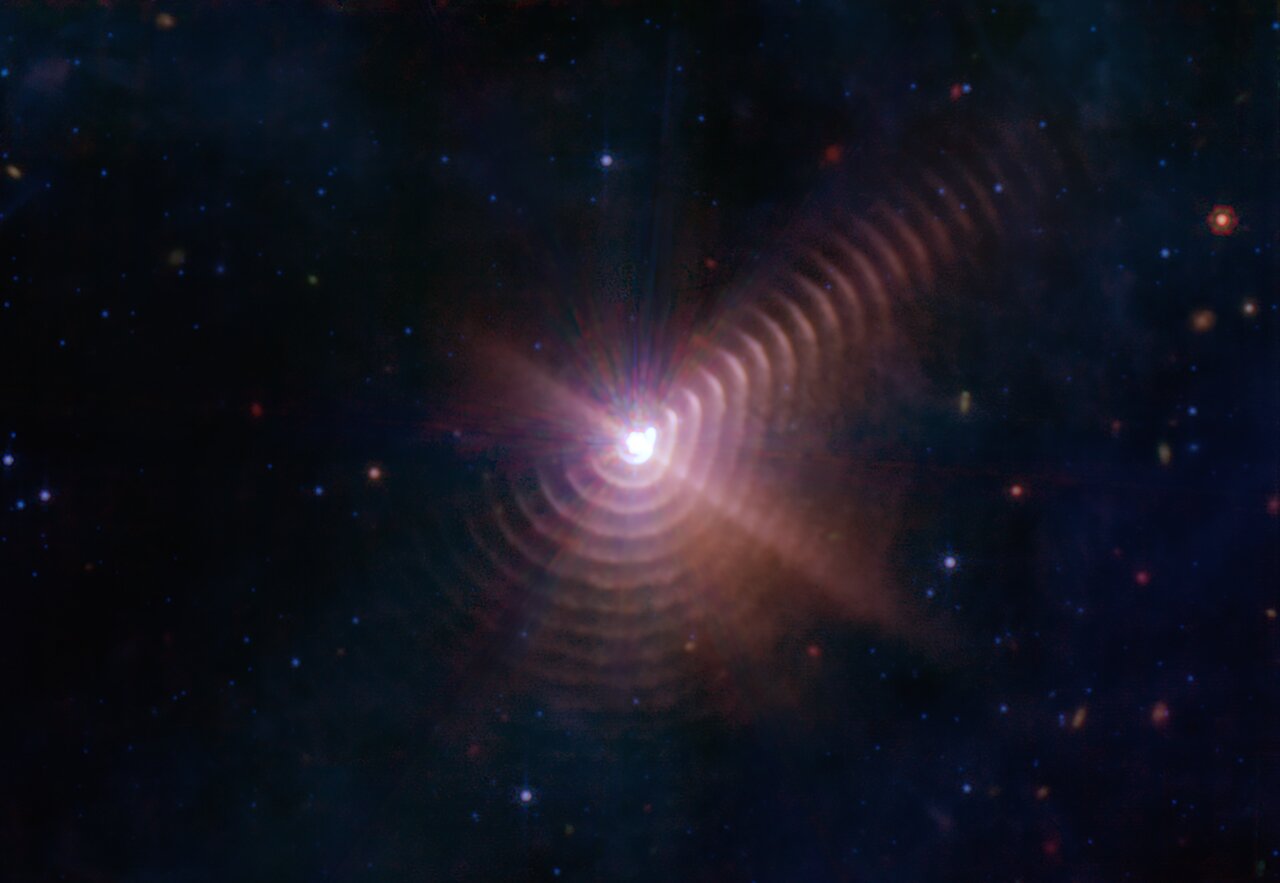 A new image from the NASA/ESA/CSA James Webb Space Telescope reveals a remarkable cosmic sight: at least 17 concentric dust rings emanating from a pair of stars. Located just over 5,000 light-years from Earth, the duo is collectively known as Wolf-Rayet 140.

Each ring was created when the two stars came close together and their stellar winds (streams of gas they blow into space) met, compressing the gas and forming dust. The stars’ orbits bring them together about once every eight years; like the rings of a tree’s trunk, the dust loops mark the passage of time.

In addition to Webb’s overall sensitivity, its Mid-Infrared Instrument (MIRI) is uniquely qualified to study the dust rings, what Ryan Lau, the lead author from NSF's NOIRLab, and his colleagues call shells, because they are thicker and wider than they appear in the image. Webb’s science instruments detect infrared light, a range of wavelengths invisible to the human eye.

MIRI detects the longest infrared wavelengths, which means it can often see cooler objects – including the dust rings – than Webb’s other instruments can. MIRI’s spectrometer also revealed the composition of the dust, formed mostly from material ejected by a type of star known as a Wolf-Rayet star.

A Wolf-Rayet star is born with at least 25 times more mass than our Sun and is nearing the end of its life, when it will likely collapse directly to black hole, or explode as a supernova. Burning hotter than in its youth, a Wolf-Rayet star generates powerful winds that push huge amounts of gas into space. The Wolf-Rayet star in this particular pair may have shed more than half its original mass via this process.

Forming Dust in the Wind

Transforming gas into dust is somewhat like turning flour into bread: It requires specific conditions and ingredients. The most common element found in stars, hydrogen, can’t form dust on its own. But because Wolf-Rayet stars shed so much mass, they also eject more complex elements typically found deep in a star’s interior, including carbon. The heavy elements in the wind cool as they travel into space and are then compressed where the winds from both stars meet, like when two hands knead dough.

Some other Wolf-Rayet systems form dust, but none is known to make rings like Wolf-Rayet 140 does. The unique ring pattern forms because the orbit of the Wolf-Rayet star in WR 140 is elongated, not circular. Only when the stars come close together – about the same distance between Earth and the Sun – and their winds collide is the gas under sufficient pressure to form dust. With circular orbits, Wolf-Rayet binaries can produce dust continuously.

The science team thinks WR 140’s winds also swept the surrounding area clear of residual material they might otherwise collide with, which may be why the rings remain so pristine rather than smeared or dispersed. There are likely even more rings that have become so faint and dispersed, not even Webb can see them in the data.

Wolf-Rayet stars may seem exotic compared to our Sun, but they may have played a role in star and planet formation. When a Wolf-Rayet star clears an area, the swept-up material can pile up at the outskirts and become dense enough for new stars to form. There is some evidence the Sun formed in such a scenario.

Using data from MIRI’s Medium Resolution Spectroscopy mode, the new study provides the best evidence yet that Wolf-Rayet stars produce carbon-rich dust molecules. What’s more, the preservation of the dust shells indicates that this dust can survive in the hostile environment between stars, going on to supply material for future stars and planets.

The catch is that while astronomers estimate that there should be at least a few thousand Wolf-Rayet stars in our galaxy, only about 600 have been found to date.

These results have been published today in Nature Astronomy.

[Image Description: The background of this Webb image of star Wolf-Rayet 140 is black. A pair of bright stars dominates the center of the image, with at least 17 pink-orange concentric dust rings emanating from them. Throughout the scene are a range of distant galaxies, the majority of which are very tiny and red, appearing as splotches.]