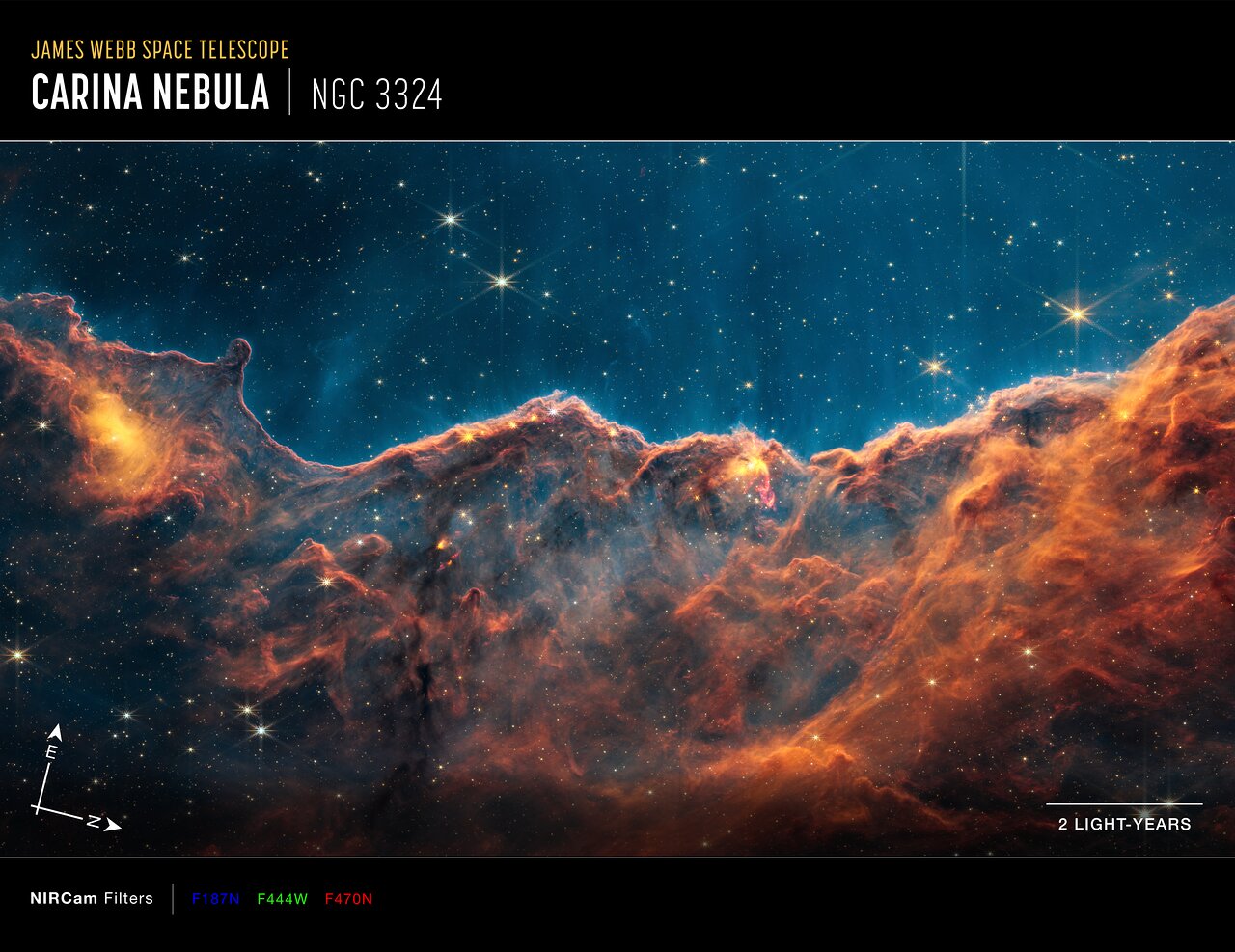 Dozens of previously hidden jets and outflows from young stars are revealed in this new image of the Cosmic Cliffs from the NASA/ESA/CSA James Webb Space Telescope’s Near-Infrared Camera (NIRCam). The Cosmic Cliffs, a region at the edge of a gigantic, gaseous cavity within NGC 3324, has long intrigued astronomers as a hotbed for star formation.

Many details of star formation in NGC 3324 remain hidden at visible-light wavelengths. Webb is perfectly primed to tease out these long-sought-after details since it can detect jets and outflows seen only in the infrared at high resolution.

This image separates out several wavelengths of light from the iconic First Image  revealed on 12 July 2022, which highlights molecular hydrogen, a vital ingredient for star formation. Insets on the right-hand side highlight three regions of the Cosmic Cliffs with particularly active molecular hydrogen outflows.

In this image, red, green, and blue were assigned to Webb’s NIRCam data at 4.7, 4.44, and 1.87 microns (F470N, F444W, and F187N filters, respectively).The north and east compass arrows on this image show the orientation of the image on the sky. Note that the relationship between north and east on the sky (as seen from below) is flipped relative to direction arrows on a map of the ground (as seen from above). The scale bar is labeled in light-years, which is the distance that light travels in one Earth-year. It takes 2 years for light to travel a distance equal to the length of the bar. One light-year is equal to about 5.88 trillion miles or 9.46 trillion kilometers.

This image shows invisible near-infrared wavelengths of light that have been translated into visible-light colors. The color key shows which NIRCam filters were used when collecting the light. The color of each filter name is the visible light color used to represent the infrared light that passes through that filter.

[Image Description: Images are shown of the Cosmic Cliffs, a region at the edge of a gigantic, gaseous cavity within NGC 3324, captured by Webb’s Near-Infrared Camera (NIRCam), with compass arrows, scale bar, and color key for reference.]