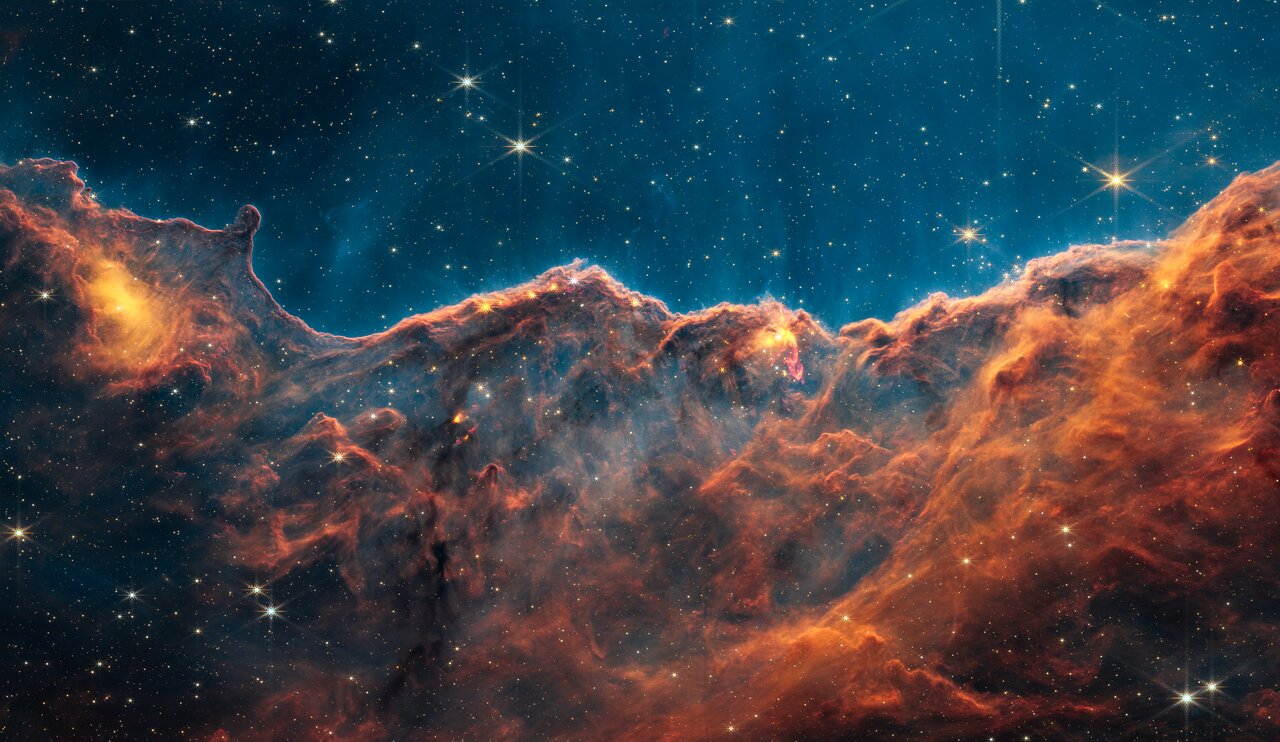 Scientists taking a “deep dive” into one of the iconic first images from the NASA/ESA/CSA James Webb Space Telescope have discovered dozens of energetic jets and outflows from young stars previously hidden by dust clouds. The discovery marks the beginning of a new era of investigating how stars like our Sun form, and how the radiation from nearby massive stars might affect the development of planets.

Dozens of previously hidden jets and outflows from young stars are revealed in this new image from Webb’s Near-Infrared Camera (NIRCam). This image separates out several wavelengths of light from the First Image revealed on 12 July 2022, which highlights molecular hydrogen, a vital ingredient for star formation.

The Cosmic Cliffs, a region at the edge of a gigantic, gaseous cavity within the star cluster NGC 3324, has long intrigued astronomers as a hotbed for star formation. While well-studied by the NASA/ESA Hubble Space Telescope, many details of star formation in NGC 3324 remain hidden at visible-light wavelengths. Webb is perfectly primed to tease out these long-sought-after details since it is built to detect jets and outflows seen only in the infrared at high resolution. Webb’s capabilities also allow researchers to track the movement of other features previously captured by Hubble.

Recently, by analyzing data from a specific wavelength of infrared light (4.7 microns), astronomers discovered two dozen previously unknown outflows from extremely young stars revealed by molecular hydrogen. Webb’s observations uncovered a gallery of objects ranging from small fountains to burbling behemoths that extend light-years from the forming stars. Many of these protostars are poised to become low mass stars, like our Sun.

Molecular hydrogen is a vital ingredient for making new stars and an excellent tracer of the early stages of their formation. As young stars gather material from the gas and dust that surround them, most also eject a fraction of that material back out again from their polar regions in jets and outflows. These jets then act like a snowplow, bulldozing into the surrounding environment. Visible in Webb’s observations is the molecular hydrogen getting swept up and excited by these jets.

Previous observations of jets and outflows looked mostly at nearby regions and more evolved objects that are already detectable in the visual wavelengths seen by Hubble. The unparalleled sensitivity of Webb allows observations of more distant regions, while its infrared optimization probes into the dust-sampling younger stages. Together this provides astronomers with an unprecedented view into environments that resemble the birthplace of our solar system.

In analyzing the new Webb observations, astronomers are also gaining insights into how active these star-forming regions are, even in a relatively short time span. By comparing the position of previously known outflows in this region caught by Webb, to archival data by Hubble from 16 years ago, the scientists were able to track the speed and direction in which the jets are moving.

This science was conducted on observations collected as part of Webb’s Early Release Observations Program. The paper was published in the Monthly Notices of the Royal Astronomical Society in December 2022.

[Image Description: The image is divided horizontally by an undulating line between a orange-burgundy cloudscape forming a nebula along the bottom portion and a comparatively blue upper portion. Speckled across both portions is a starfield, showing innumerable stars of many sizes.]