On the left is Webb’s Mid-Infrared Instrument (MIRI) image. Interstellar dust cloaks the scene. And while mid-infrared light specialises in detailing where dust is, the stars aren’t bright enough at these wavelengths to appear. Instead, these looming, leaden-hued pillars of gas and dust gleam at their edges, hinting at the activity within. Learn more about this image here.

On the right is Webb’s Near-Infrared Camera (NIRCam) image, where newly formed protostars are the scene-stealers. These are the bright red orbs that typically have diffraction spikes and lie outside one of the dusty pillars. Learn more about this image here. 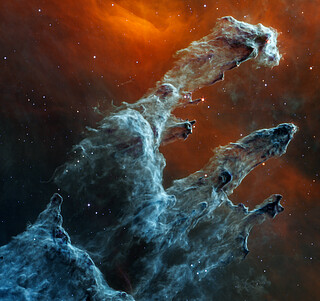 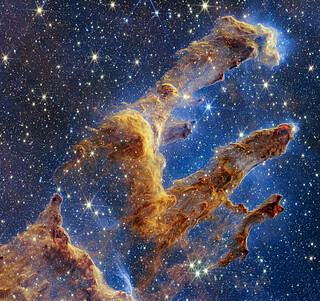