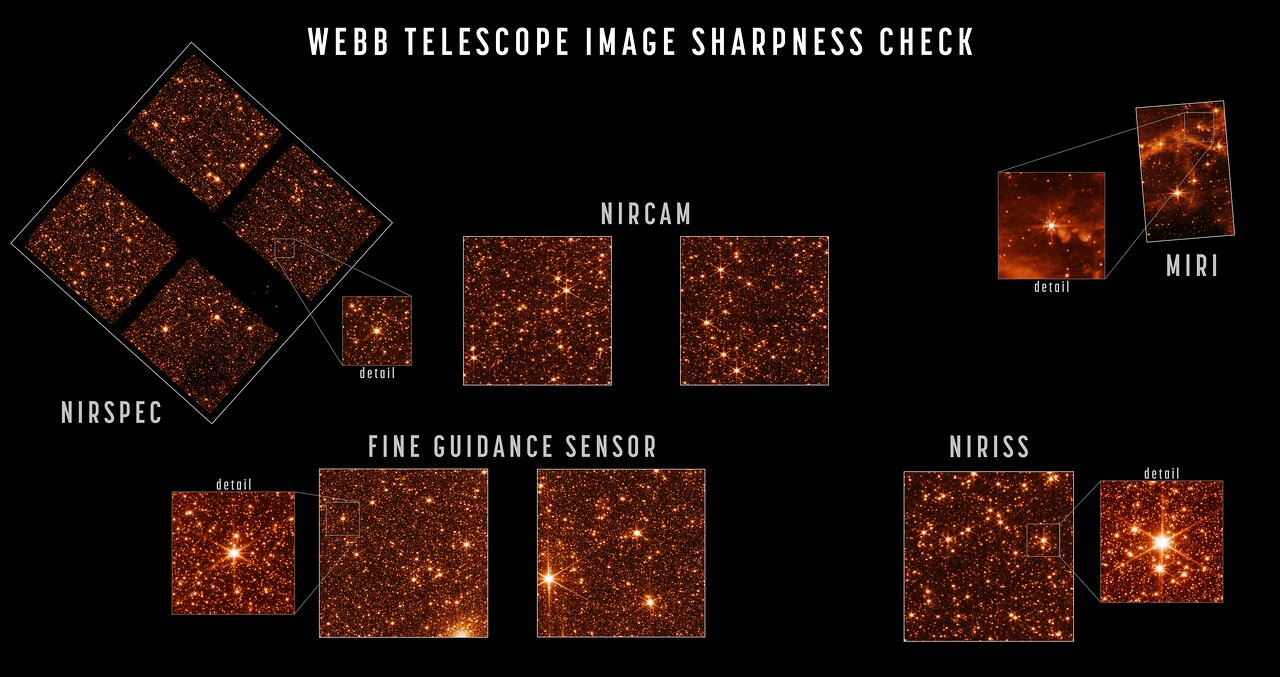 Alignment of the NASA/ESA/CSA James Webb Space Telescope is now complete. After full review, the observatory has been confirmed to be capable of capturing crisp, well-focused images with each of its four powerful onboard science instruments.

Upon completing the seventh and final stage of telescope alignment, the team held a set of key decision meetings and unanimously agreed that Webb is ready to move forward into its next and final series of preparations, known as science instrument commissioning. This process of setting up and testing the instruments will take about two months before scientific operations begin in the summer.

The alignment of the telescope across all of Webb’s instruments can be seen in a series of images that captures the observatory’s full field of view.

Engineering images of sharply focused stars in the field of view of each instrument demonstrate that the telescope is fully aligned and in focus. For this test, Webb pointed at part of the Large Magellanic Cloud, a small satellite galaxy of the Milky Way, providing a dense field of hundreds of thousands of stars across all the observatory’s sensors.

The sizes and positions of the images shown here depict the relative arrangement of each of Webb’s instruments in the telescope’s focal plane, each pointing at a slightly offset part of the sky relative to one another.

ESA's NIRSpec is a spectrograph rather than imager but can take images, such as the 1.1 micron image shown here, for calibrations and target acquisition. The dark regions visible in parts of the NIRSpec data are due to structures of its microshutter array, which has several hundred thousand controllable shutters that can be opened or shut to select which light is sent into the spectrograph.

Lastly, Webb’s Fine Guidance Sensor tracks guide stars to point the observatory accurately and precisely; its two sensors are not generally used for scientific imaging but can take calibration images such as those shown here. This image data is used not just to assess image sharpness but also to precisely measure and calibrate subtle image distortions and alignments between sensors as part of Webb’s overall instrument calibration process.

The optical performance of the telescope continues to be better than the engineering team’s most optimistic predictions. Webb’s mirrors are now directing fully focused light collected from space down into each instrument, and each instrument is successfully capturing images with the light being delivered to them. The image quality delivered to all instruments is “diffraction-limited,” meaning that the fineness of detail that can be seen is as good as physically possible given the size of the telescope. From this point forward the only changes to the mirrors will be very small, periodic adjustments to the primary mirror segments.