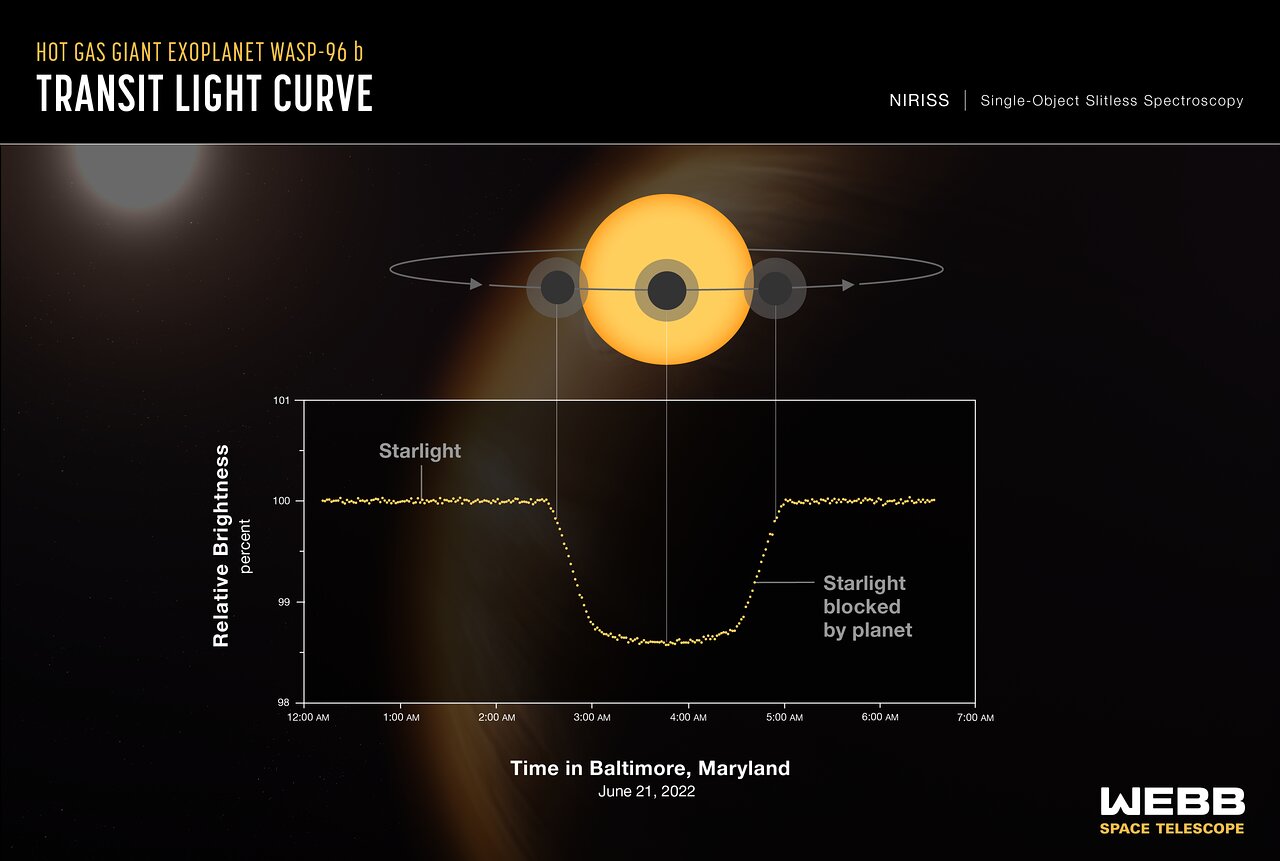 A light curve from Webb’s Near-Infrared Imager and Slitless Spectrograp (NIRISS) shows the change in brightness of light from the WASP-96 star system over time as the planet transits the star. A transit occurs when an orbiting planet moves between the star and the telescope, blocking some of the light from the star. This observation was made using NIRISS’s Single-Object Slitless Spectroscopy (SOSS) mode, which involves capturing the spectrum of a single bright object, like the star WASP-96, in a field of view.

To capture these data, Webb stared at the WASP-96 star system for 6 hours 23 minutes, beginning about 2½ hours before the transit and ending about 1½ hours after the transit was complete. The transit itself lasted for just under 2½ hours. The curve includes a total of 280 individual brightness measurements – one every 1.4 minutes.

Because the observation was made using a spectrograph, which spreads the light out into hundreds of individual wavelengths, each of the 280 points on the graph represents the combined brightness of thousands of wavelengths of infrared light.

The actual dimming caused by the planet is extremely small: The difference between the brightest and dimmest points is less than 1.5 percent. NIRISS is ideally suited for this observation because it has the ability to observe relatively bright targets over time, along with the sensitivity needed to measure such small differences in brightness: In this observation, the instrument was able to measure differences in brightness as small as 0.02 percent.

Although the presence, size, mass, and orbit of the planet had already been determined based on previous transit observations, this transit light curve can be used to confirm and refine existing measurements, such as the planet’s diameter, the timing of the transit, and the planet’s orbital properties.

WASP-96 b is a hot gas giant exoplanet that orbits a Sun-like star roughly 1,150 light years away, in the constellation Phoenix. The planet orbits extremely close to its star (less than 1/20th the distance between Earth and the Sun) and completes one orbit in less than 3½ Earth-days. The planet’s discovery, from ground-based observations, was announced in 2014.

The background illustration of WASP-96 b and its Sun-like star is based on current understanding of the planet from both NIRISS spectroscopy and previous ground- and space-based observations. Webb has not captured a direct image of the planet or its atmosphere.

NIRISS was contributed by the Canadian Space Agency. The instrument was designed and built by Honeywell in collaboration with the Université de Montréal and the National Research Council Canada.