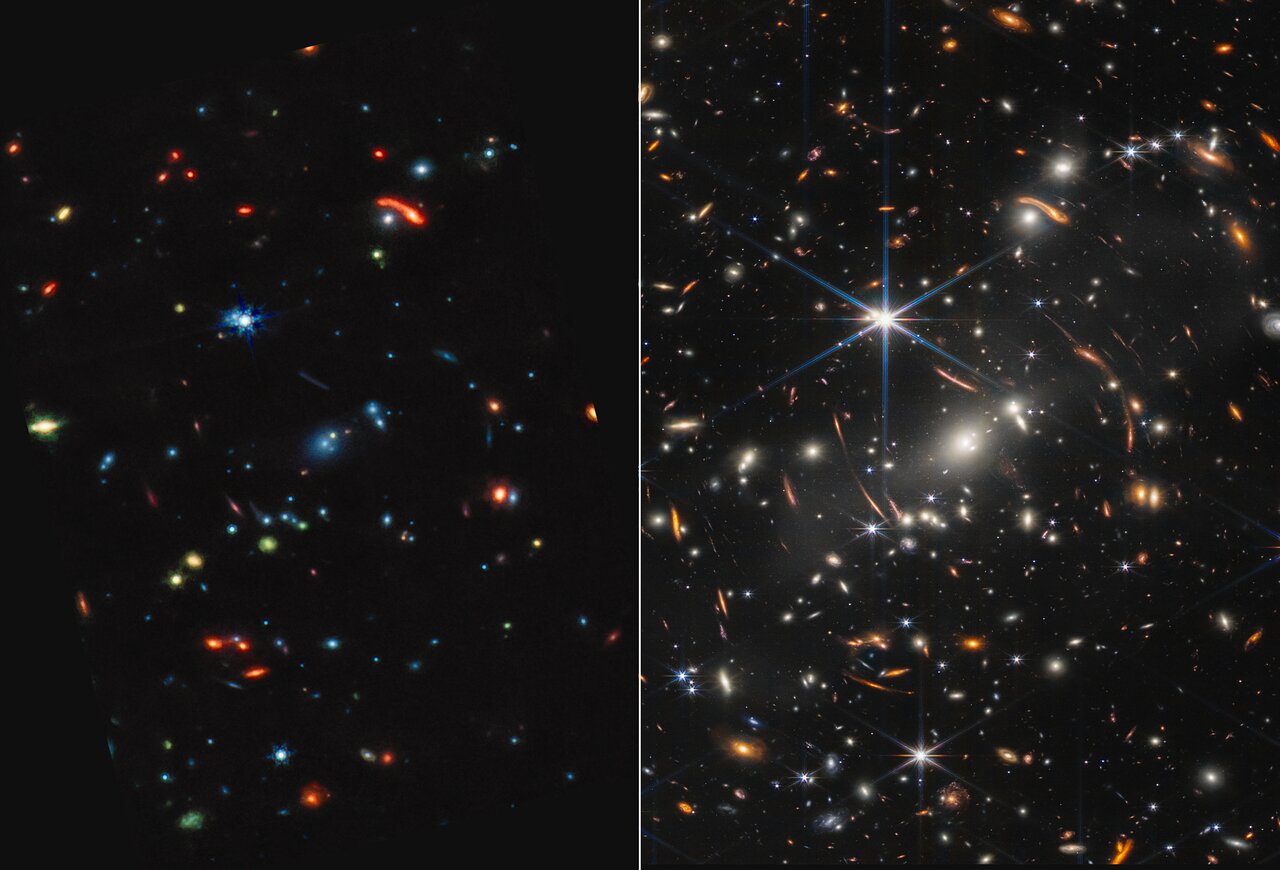 Galaxy cluster SMACS 0723 is a technicolour landscape when viewed in mid-infrared light by the NASA/ESA/CSA James Webb Space Telescope. Compared to Webb’s near-infrared image at right, the galaxies and stars are awash in new colours.

Start by comparing the largest bright blue star. At right, it has very long diffraction spikes, but in mid-infrared at left, its smaller points appear more like a snowflake’s. Find more stars by looking for these telltale – if tiny – spikes. Stars also appear yellow, sometimes with green diffraction spikes.

If an object is blue and lacks spikes, it’s a galaxy. These galaxies contain stars, but very little dust. This means that their stars are older – there is less gas and dust available to condense to form new stars. It also means their stars are ageing.

The red objects in this field are enshrouded in thick layers of dust, and may very well be distant galaxies. Some may be stars, but research is needed to fully identify each object in the mid-infrared image.

The prominent arcs at the centre of the galaxy cluster, which are galaxies that are stretched and magnified by gravitational lensing, appear blue in the Mid-Infrared Instrument (MIRI) image at left and orange in the Near-Infrared Camera (NIRCam) image at right. These galaxies are older and have much less dust.

Galaxies’ sizes in both images offer clues as to how distant they may be – the smaller the object, the more distant it is. In mid-infrared light, galaxies that are closer appear whiter.

Among this kaleidoscope of colours in the MIRI image, green is the most tantalising. Green indicates a galaxy’s dust includes a mix of hydrocarbons and other chemical compounds.

The differences in Webb’s images are owed to the technical capabilities of the MIRI and NIRCam instruments. MIRI captures mid-infrared light, which highlights where the dust is. Dust is a major ingredient for star formation. Stars are brighter at shorter wavelengths, which is why they appear with prominent diffraction spikes in the NIRCam image.

With Webb’s mid-infrared data, researchers will soon be able to add much more precise calculations of dust quantities in stars and galaxies to their models, and begin to more clearly understand how galaxies at any distance form and change over time.