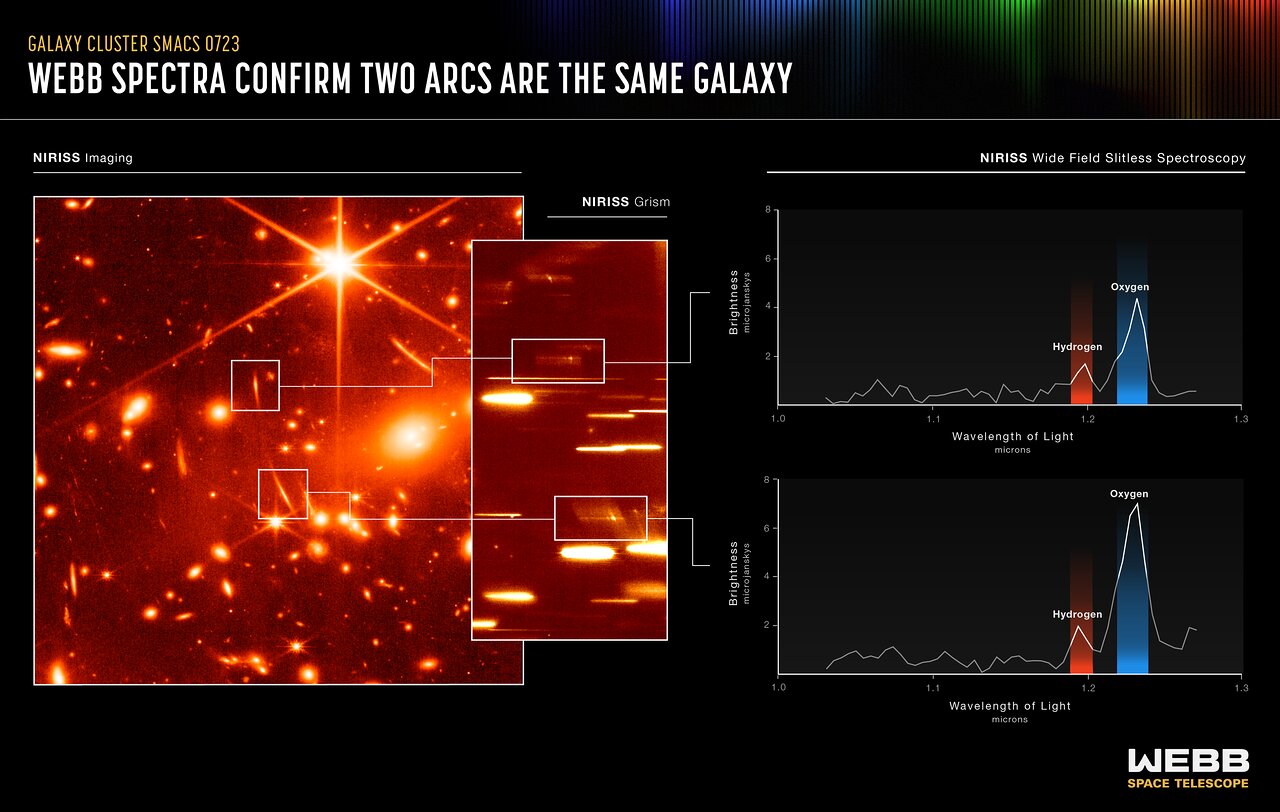 At far left is a near-infrared image of galaxy cluster SMACS 0723. A group of massive galaxies below and to the right of the bright central star have distorted, magnified, and mirrored many galaxies in this field.

By quickly examining the image at left by eye, it becomes clearer that one arc may be made up of two similar looking galaxies. Their bright central regions match, despite their stretched appearances. These may be lensed galaxies – one galaxy that is mirrored in a second location. Are they the same? Researchers can’t be sure from the image alone – more data are needed to confirm a match.

Scientists do this by gathering spectra, which spread light out so they can fully examine an object’s makeup. Webb’s Near-Infrared Imager and Slitless Spectrograph (NIRISS), which gathers spectra of every object in any field it observes, was pointed at the galaxy cluster to gather more detail. A segment of the NIRISS grism image (an instrument that has a grating, or stair steps, on a prism), at centre, shows how ionised oxygen and atomic hydrogen emission lines are distributed along the arc.

Next, the spectra from each of these two galaxies were plotted as graphs, shown at right, to reveal their compositions. The graphs, known as spectra, match, which indicates that these arcs are mirror images of the same galaxy. Webb’s spectra from NIRISS also quickly proved that light from both galaxies was emitted 9.3 billion years ago, further confirming they are one and the same.

Using Webb’s NIRISS is like opening a treasure chest overflowing with spectra. For example, this instrument can disperse the spectra along the image vertically and horizontally. Researchers can use both modes to untangle which lines match each source.

Every object’s image can be transformed into spectra like the two shown above. So even if researchers aren’t intending to study a particular galaxy in the field, they may make a surprise discovery.

NIRISS was contributed by the Canadian Space Agency (CSA). The instrument was designed and built by Honeywell in collaboration with the Université de Montréal and the National Research Council Canada.