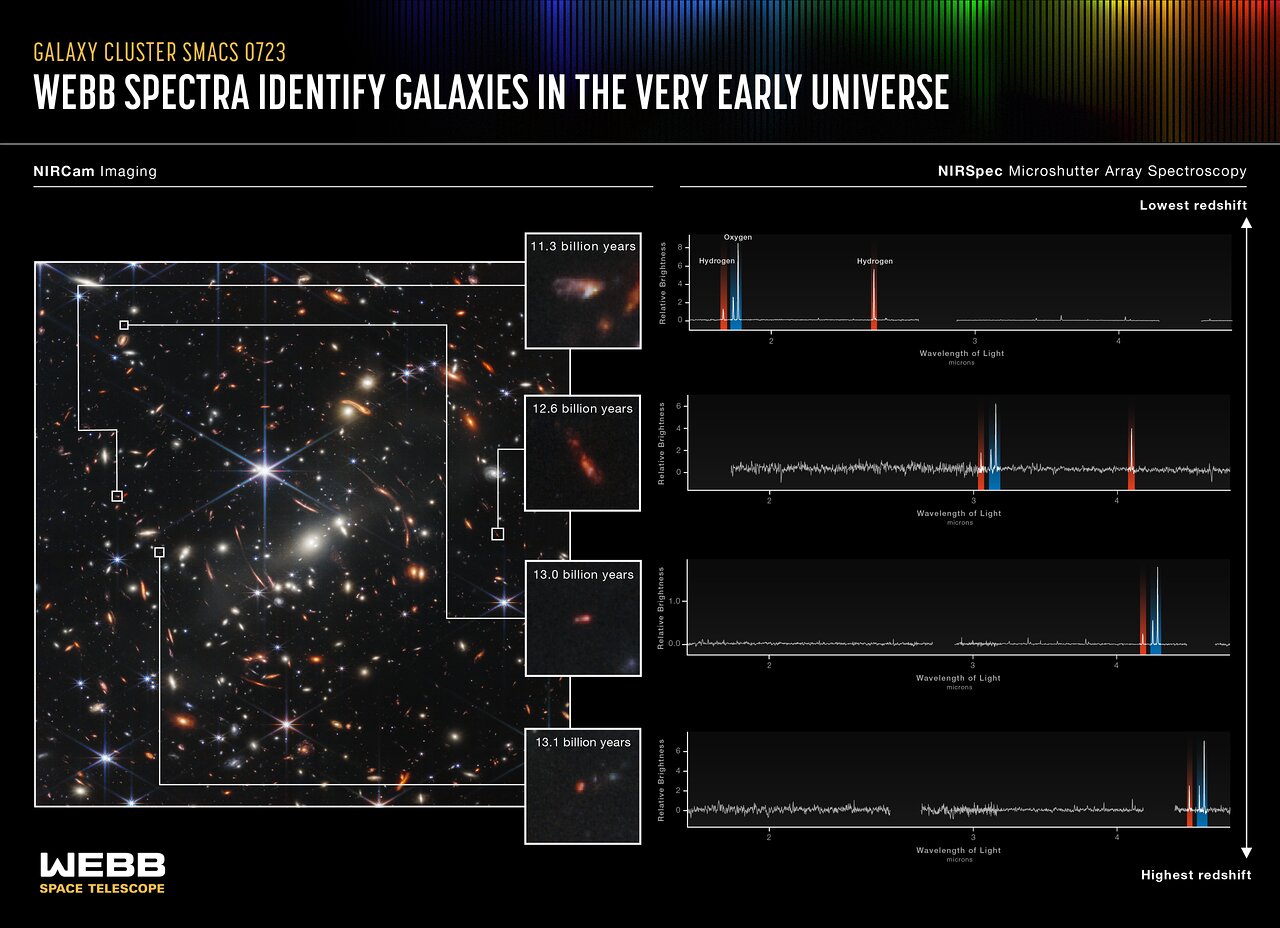 The NASA/ESA/CSA James Webb Space Telescope has yet another discovery machine aboard – the Near-Infrared Spectrograph’s (NIRSpec’s) microshutter array. This instrument has more than 248,000 tiny doors that can be individually opened to gather spectra (light) of up to approximately 150 individual objects simultaneously.

Of the thousands of distant galaxies behind galaxy cluster SMACS 0723, NIRSpec observed 48 individually – all at the same time – in a field that is approximately the size of a grain of sand held at arm’s length. Quick analysis made it immediately clear that several of these galaxies were observed as they existed at very early periods in the history of the universe, which is estimated to be 13.8 billion years old.

Look for the same feature highlighted in each spectrum. Three lines appear in the same order every time – one hydrogen line followed by two ionised oxygen lines. Where this pattern falls on each spectrum tells researchers the redshift of individual galaxies, revealing how long ago their light was emitted.

Light from the farthest galaxy shown travelled 13.1 billion years before Webb’s mirrors captured it. These observations mark the first time these particular emission lines have been seen at such immense distances – and these are only Webb’s initial observations. There may be even more distant galaxies in this image!

In these spectra, Webb has also shown us the chemical composition of galaxies in the very early universe for the first time. This was made possible by the telescope’s position in space – far away from Earth’s atmosphere, which filters out some infrared light – and its specialisation in gathering high-resolution near-infrared light.

And since similar spectra from galaxies at closer distances have long been studied by other space- and ground-based observatories, astronomers already know a lot about the properties of nearby galaxies. Now, astronomers will be able to study and compare spectra from Webb to determine how galaxies have changed over billions of years, dating back to the early universe.

With Webb’s data, researchers can now measure each galaxy’s distance, temperature, gas density, and chemical composition. We will soon learn an incredible amount about galaxies that existed all across cosmic time!