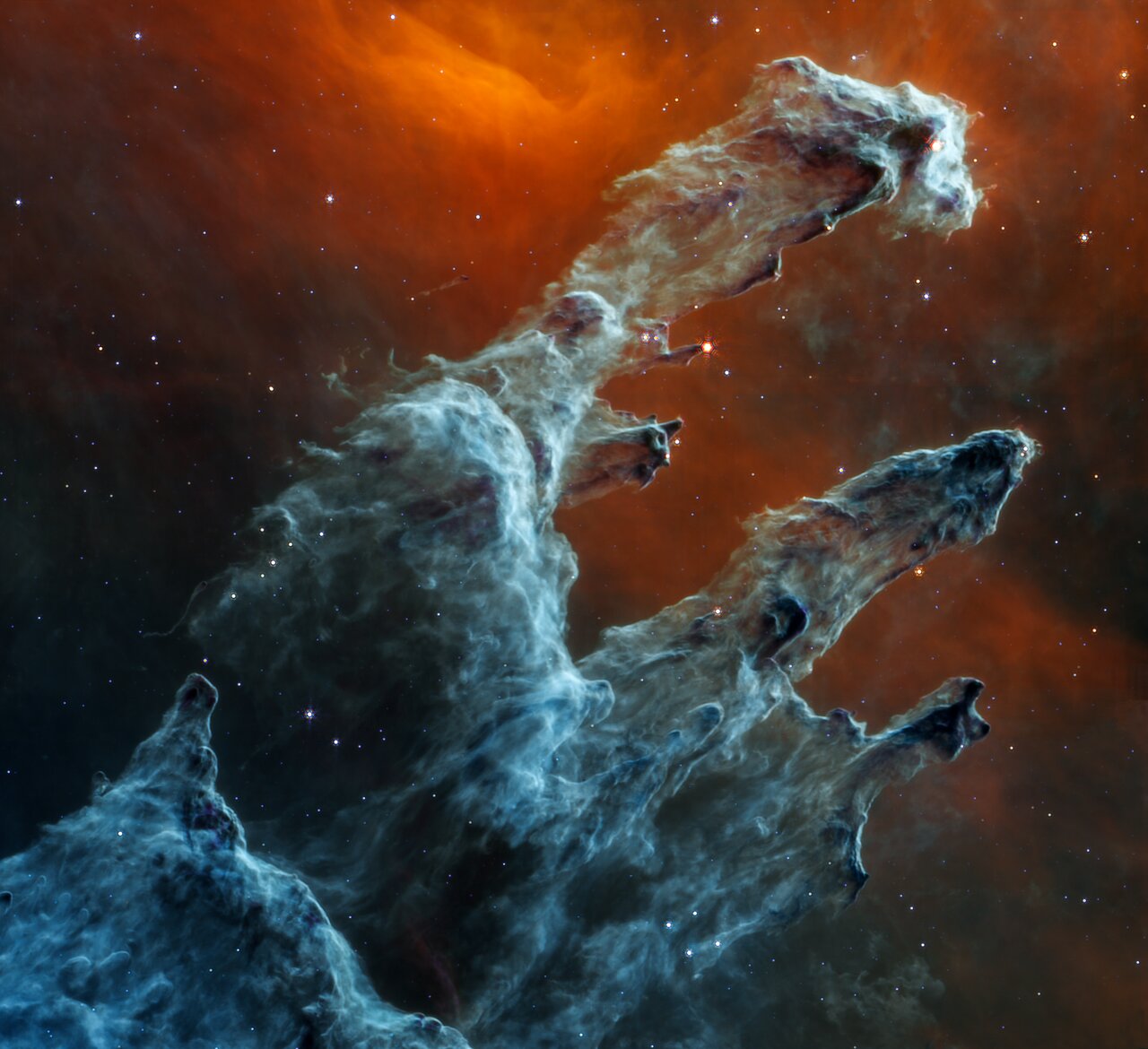 The NASA/ESA/CSA James Webb Space Telescope’s mid-infrared view of the Pillars of Creation strikes a chilling tone. Thousands of stars that exist in this region disappear from view — and seemingly endless layers of gas and dust become the centrepiece.

The detection of dust by Webb’s Mid-Infrared Instrument (MIRI) is extremely important — dust is a major ingredient for star formation. Many stars are actively forming in these dense blue-grey pillars. When knots of gas and dust with sufficient mass form in these regions, they begin to collapse under their own gravitational attraction, slowly heat up, and eventually form new stars.

Although the stars appear to be missing, they aren’t. Stars typically do not emit much mid-infrared light. Instead, they are easiest to detect in ultraviolet, visible, and near-infrared light. In this MIRI view, two types of stars can be identified. The stars at the end of the thick, dusty pillars have recently eroded most of the more distant material surrounding them but they can be seen in mid-infrared light because they are still surrounded by cloaks of dust. In contrast, blue tones indicate stars that are older and have shed most of their gas and dust.

Mid-infrared light also details dense regions of gas and dust. The red region toward the top, which forms a delicate V shape, is where the dust is both diffuse and cooler. And although it may seem like the scene clears toward the bottom left of this view, the darkest grey areas are where densest and coolest regions of dust lie. Notice that there are many fewer stars and no background galaxies popping into view.

Webb’s mid-infrared data will help researchers determine exactly how much dust is in this region — and what it’s made of. These details will make models of the Pillars of Creation far more precise. Over time, we will begin to understand more clearly how stars form and burst out of these dusty clouds over millions of years.

[Image Description: Semi-opaque layers of blue and grey gas and dust start at the bottom left and rise toward the top right. There are three prominent pillars. The left pillar is the largest and widest. The peaks of the second and third pillars are set off in darker shades of blue outlines. Few red stars appear within the pillars. Some blue and white stars dot the overall scene.]