The months-long process of preparing the NASA/ESA/CSA James Webb Space Telescope for science is now complete. All of the seventeen ways or ‘modes’ to operate Webb’s scientific instruments have now been checked out, which means that Webb has completed its commissioning activities and is ready to begin full scientific operations.

Each of Webb’s four scientific instruments has multiple modes of operation, utilizing customized lenses, filters, prisms, and specialized machinery that needed to be individually tested, calibrated, and ultimately verified in their operational configuration in space before beginning to capture precise scientific observations of the Universe. The Webb team has already started to take some of the first science data, and 12 July 2022 will mark the release of the telescope’s first full-color images and spectroscopic data.

The first of Webb’s four primary scientific instruments to conclude its postlaunch preparation and be confirmed ready for science, was the Near-Infrared Imager and Slitless Spectrograph instrument (NIRISS).

This was soon followed by the readiness of the Mid-Infrared instrument (MIRI). The last MIRI mode to be checked off was its coronagraphic imaging capability, which uses two different styles of masks to intentionally block starlight from hitting its sensors when attempting to make observations of the star’s orbiting planets. These customised masks allow for scientists to directly detect exoplanets and study dust disks around their host stars in a way that’s never been done before. MIRI was developed as a partnership between NASA and ESA (European Space Agency), with NASA’s Jet Propulsion Laboratory leading the U.S. efforts and a multi-national consortium of European astronomical institutes contributing for ESA.

This was followed by the Near-Infrared Spectrograph (NIRSpec), being declared ready for science for its four key modes. The final mode verified for NIRSpec was the multi-object spectroscopy mode, a key capability that allows Webb to capture spectra, or rainbows of infrared light, from hundreds of different cosmic targets at once. In multi-object spectroscopy mode (MOS), NIRSpec can individually open and close more than 250,000 small shutters, all just the width of a human hair, to view some portions of the sky while blocking others. By controlling this “microshutter array,” Webb can observe multiple specific targets while reducing interference from others. To support the community in preparing the NIRSpec MOS programs and getting ready to analyse the data, sophisticated simulations have been conducted to closely mimic the deep spectroscopic observations that will be performed during Webb’s science operations, as a joint effort of the NIRCam and NIRSpec GTO teams. NIRSpec was built for the European Space Agency by a consortium of European companies led by Airbus Defence and Space (ADS) with NASA’s Goddard Space Flight Centre providing its detector and micro-shutter subsystems.

The last of Webb’s instruments to be declared ready for science was the Near Infrared Camera (NIRCam). 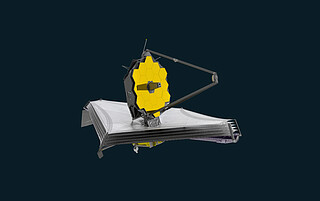