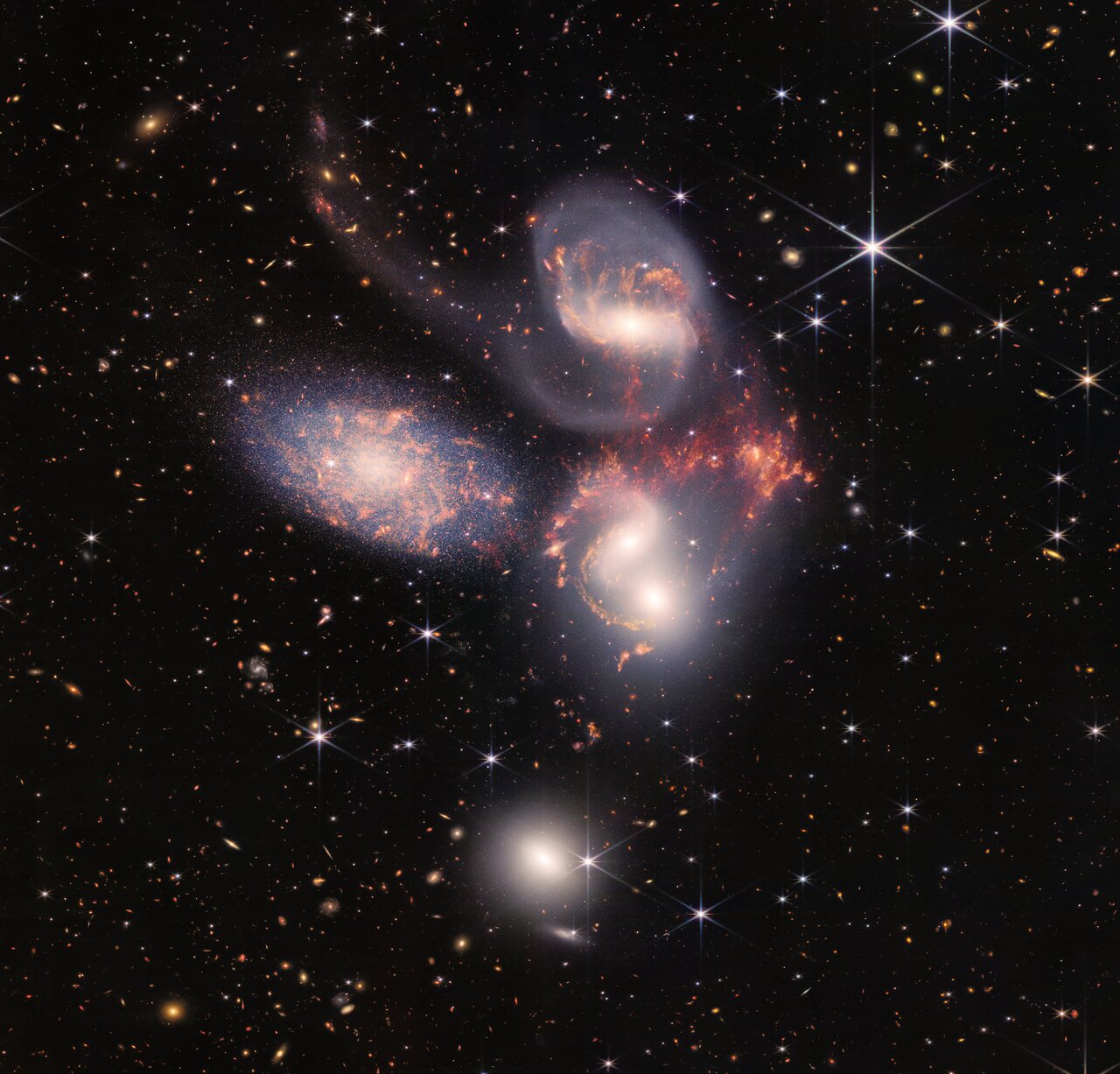 An enormous mosaic of Stephan’s Quintet is the largest image to date from the NASA/ESA/CSA James Webb Space Telescope, covering about one-fifth of the Moon’s diameter. It contains over 150 million pixels and is constructed from almost 1,000 separate image files. The visual grouping of five galaxies was captured by Webb’s Near-Infrared Camera (NIRCam) and Mid-Infrared Instrument (MIRI).

With its powerful, infrared vision and extremely high spatial resolution, Webb shows never-before-seen details in this galaxy group. Sparkling clusters of millions of young stars and starburst regions of fresh star birth grace the image. Sweeping tails of gas, dust and stars are being pulled from several of the galaxies due to gravitational interactions. Most dramatically, Webb’s MIRI instrument captures huge shock waves as one of the galaxies, NGC 7318B, smashes through the cluster. These regions surrounding the central pair of galaxies are shown in the colours red and gold.

This composite NIRCam-MIRI image uses two of the three MIRI filters to best show and differentiate the hot dust and structure within the galaxy. MIRI sees a distinct difference in colour between the dust in the galaxies versus the shock waves between the interacting galaxies. The image processing specialists at the Space Telescope Science Institute in Baltimore opted to highlight that difference by giving MIRI data the distinct yellow and orange colours, in contrast to the blue and white colours assigned to stars at NIRCam’s wavelengths.

Tight groups like this may have been more common in the early universe when their superheated, infalling material may have fueled very energetic black holes called quasars. Even today, the topmost galaxy in the group – NGC 7319 – harbours an active galactic nucleus, a supermassive black hole that is actively accreting material.

In NGC 7320, the leftmost and closest galaxy in the visual grouping, NIRCam was remarkably able to resolve individual stars and even the galaxy’s bright core. Old, dying stars that are producing dust clearly stand out as red points with NIRCam.

The new information from Webb provides invaluable insights into how galactic interactions may have driven galaxy evolution in the early universe.

As a bonus, NIRCam and MIRI revealed a vast sea of many thousands of distant background galaxies reminiscent of Hubble’s Deep Fields.