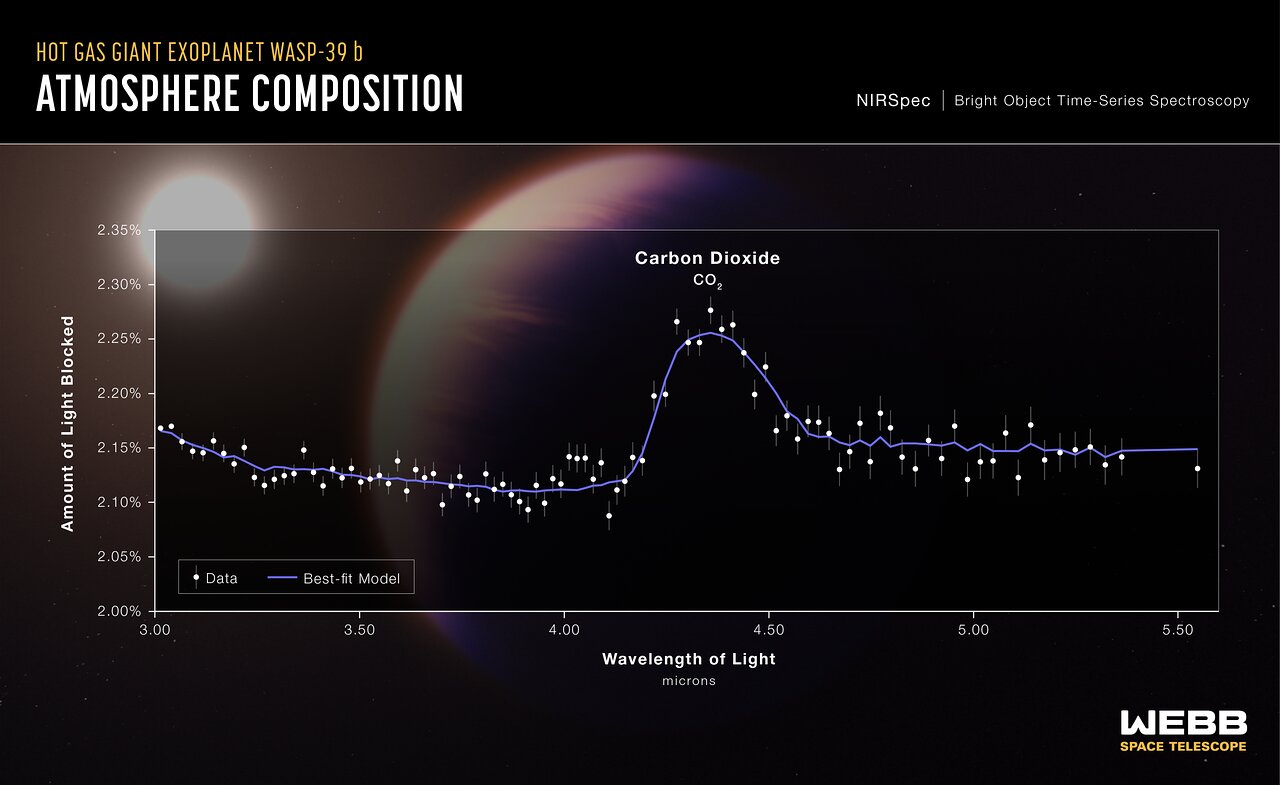 A transmission spectrum is made by comparing starlight filtered through a planet’s atmosphere as it moves in front of the star, to the unfiltered starlight detected when the planet is beside the star. Each of the 95 data points (white circles) on this graph represents the amount of a specific wavelength of light that is blocked by the planet and absorbed by its atmosphere.

This spectrum was made by measuring the change in brightness of each wavelength over time as the planet transited its star. The planet’s atmosphere absorbs some wavelengths more than others. Wavelengths absorbed by the atmosphere appear as peaks in the transmission spectrum. The hill centred around 4.3 microns represents the light absorbed by carbon dioxide.

The grey lines extending above and below each data point are error bars that show the uncertainty of each measurement, or the reasonable range of possible values. For a single observation, the error on these measurements is extremely small.

The blue line is a best-fit model that takes into account the data, the known properties of WASP-39 b and its star (e.g., size, mass, temperature), and the assumed characteristics of the atmosphere. Researchers can vary the parameters in the model — changing unknown characteristics like cloud height in the atmosphere and abundances of various gases — to get a better fit and further understand what the atmosphere is really like. The model shown here assumes that the planet is made primarily of hydrogen and helium with small amounts of water and carbon dioxide, with a thin veil of clouds.

The observation was made using the NIRSpec PRISM bright object time-series mode, which involves using a prism to spread out light from a single bright object (like the star WASP-39) and measuring the brightness of each wavelength at set intervals of time.

WASP-39 b is a hot gas giant exoplanet that orbits a Sun-like star roughly 700 light-years away, in the constellation Virgo. The planet orbits extremely close to its star (less than 1/20 of the distance between Earth and the Sun) and completes one orbit in just over four Earth-days. The planet’s discovery, based on ground-based observations, was announced in 2011. The star, WASP-39, is roughly the same size, mass, temperature, and colour as the Sun.

The background illustration of WASP-39 b and its star is based on current understanding of the planet from Webb spectroscopy and previous ground- and space-based observations. Webb has not captured a direct image of the planet or its atmosphere.