Webb demonstrates its spectroscopic power with the first unequivocal detection of carbon dioxide in a planetary atmosphere outside the Solar System.

The NASA/ESA/CSA James Webb Space Telescope has found definitive evidence for carbon dioxide in the atmosphere of a gas giant planet orbiting a Sun-like star 700 light-years away. The result provides important insights into the composition and formation of the planet, and is indicative of Webb’s ability to also detect and measure carbon dioxide in the thinner atmospheres of smaller rocky planets.

WASP-39 b is a hot gas giant with a mass roughly one quarter that of Jupiter (about the same as Saturn) and a diameter 1.3 times that of Jupiter. Its extreme puffiness is related in part to its high temperature (about 900 °C). Unlike the cooler, more compact gas giants in our Solar System, WASP-39 b orbits very close to its host star — only about one eighth of the distance between the Sun and Mercury — completing one circuit in just over four Earth-days. The planet’s discovery, reported in 2011, was based on ground-based detections of the subtle, periodic dimming of light from its host star as the planet transits, or passes in front of the star.

Transiting planets like WASP-39 b, whose orbits we observe edge-on rather than from above, can provide researchers with ideal opportunities to probe planetary atmospheres.

During a transit, some of the starlight is eclipsed by the planet completely (causing the overall dimming) and some is transmitted through the planet’s atmosphere. The atmosphere filters out some colours more than others, depending on factors such as what it is made of, how thick it is, and whether or not there are clouds. (We observe this effect in our own atmosphere as the colour and quality of daylight changes depending on how hazy or humid the air is, or where the Sun is in the sky.)

Because different gases absorb different combinations of colours, researchers can analyse small differences in the brightness of the transmitted light across a spectrum of wavelengths and hence determine exactly what an atmosphere is made of. With its combination of inflated atmosphere and frequent transits, WASP-39 b is an ideal target for this technique, known as transmission spectroscopy. The team used Webb’s Near-Infrared Spectrograph (NIRSpec) to make this detection.

In the resulting spectrum of the exoplanet’s atmosphere, the small hill between 4.1 and 4.6 microns is anything but trivial to exoplanet researchers. It is the first clear, detailed, indisputable evidence for carbon dioxide ever detected in a planet outside the Solar System.

“As soon as the data appeared on my screen, the whopping carbon dioxide feature grabbed me,” said Zafar Rustamkulov, a graduate student at Johns Hopkins University in the United States and member of the transiting exoplanet team. “It was a special moment, crossing an important threshold in exoplanet sciences.”

Even without the strong carbon dioxide feature, this spectrum would be remarkable. No observatory has ever measured such subtle differences in the brightness of so many individual colours across the 3- to 5.5-micron range in an exoplanet transmission spectrum before. Access to this part of the spectrum is crucial for measuring the abundances of gases like water and methane, as well as carbon dioxide, which are thought to exist in the atmospheres of many different types of exoplanets.

“Detecting such a clear signal of carbon dioxide on WASP-39 b bodes well for the detection of atmospheres on smaller, terrestrial-sized planets,” said Natalie Batalha of the University of California at Santa Cruz, USA, who leads the team of researchers studying transiting exoplanets with Webb.

“It's amazing to see the ESA NIRSpec instrument producing this incredible data so early in the mission, when we know we can still improve on the data quality moving forward,” added Sarah Kendrew, ESA Webb MIRI Instrument and Calibration Scientist at the Space Telescope Science Institute in Baltimore, USA.

Understanding the composition of a planet’s atmosphere is important because it tells us something about the origin of the planet and how it evolved. “Carbon dioxide molecules are sensitive tracers of the story of planet formation,” said team member Mike Line of Arizona State University, USA. “By measuring this carbon dioxide feature, we can determine how much solid versus how much gaseous material was used to form this gas giant planet. In the coming decade, Webb will make this measurement for a variety of planets, providing insights into the details of how planets form and the uniqueness of our own Solar System.”

These results also build upon existing research by the NASA/ESA Hubble Space Telescope. “Over the last few decades the Hubble Space Telescope has been setting the precedent for what mysteries these atmospheres contain, from clouds scattering obscuring molecular features, to detections of water vapour absorption, and escaping atmospheres,” said team member Hannah Wakeford of University of Bristol in the United Kingdom. “Webb will complement and extend these studies with higher resolution, wavelength coverage, and precision to reveal the key trends in the data pointing to the formation and evolution of these planets.”

The NIRSpec prism observation of WASP-39 b is just one part of a larger investigation that includes observations of the planet using a number of instruments, as well as observations of two other transiting planets. The investigation, which is part of the Early Release Science program, was designed to provide the exoplanet research community with robust Webb data as soon as possible.

“Seeing the data for the first time was like reading a poem in its entirety, when before we only had every third word,” added team member Laura Kreidberg of the Max Planck Institute for Astronomy in Heidelberg, Germany. “These first results are just the beginning; the Early Release Science data have shown that Webb performs beautifully, and smaller and cooler exoplanets (more like our own Earth) are within its reach.”

“The goal is to analyse the Early Release Science observations quickly and develop open-source tools for the science community to use,” explained Vivien Parmentier from Oxford University in the United Kingdom. “This enables contributions from all over the world and ensures that the best possible science will come out of the coming decades of observations.”

These results will be published next week in Nature. The data was obtained during the Webb Early Release Science (DD-ERS) program #1366. 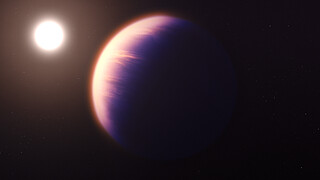 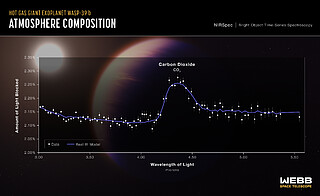 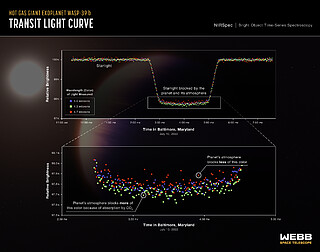 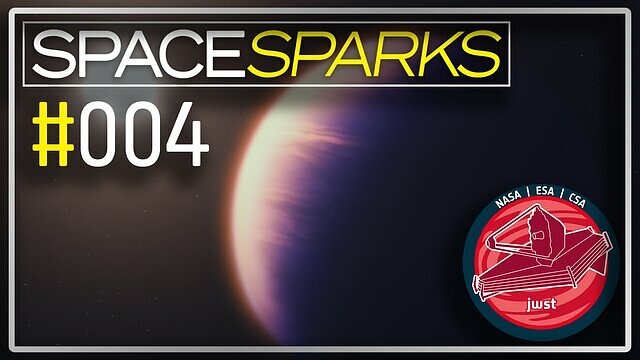