Webb Has Arrived at L2

Today, at 20:00 CET, the James Webb Space Telescope fired its onboard thrusters for nearly five minutes (297 seconds) to complete the final post launch course correction to Webb’s trajectory. This mid-course correction burn inserted Webb toward its final orbit around the second Sun-Earth Lagrange point, or L2, nearly 1.5 million kilometres away from Earth.

The final mid-course burn added only about 1.6 metres per second – a mere walking pace – to Webb’s speed, which was all that was needed to send it to its preferred “halo” orbit around the L2 point.

Webb’s orbit will allow it a wide view of the cosmos at any given moment, as well as the opportunity for its telescope optics and scientific instruments to get cold enough to function and perform optimal science. Webb has used as little propellant as possible for course corrections while it travels out to the realm of L2, to leave as much remaining propellant as possible for Webb’s ordinary operations over its lifetime: station-keeping (small adjustments to keep Webb in its desired orbit) and momentum unloading (to counteract the effects of solar radiation pressure on the huge sunshield).

Now that Webb’s primary mirror segments and secondary mirror have been deployed from their launch positions, engineers will begin the sophisticated three-month process of aligning the telescope’s optics to nearly nanometre precision. 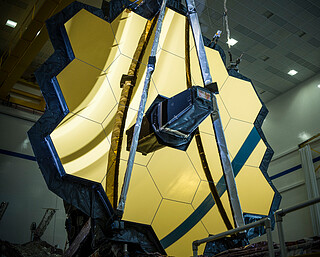