Webb continues its search into the earliest times of our Universe, revealing the surprising formation of a massive galaxy cluster around a powerful, red quasar.

Astronomers looking into the early Universe have made a surprising discovery using the NASA/ESA/CSA James Webb Space Telescope. Webb’s spectroscopic capabilities, combined with its infrared sensitivity, have uncovered a cluster of massive galaxies in the process of formation around an extremely red quasar. The result will expand our understanding of how galaxies in the early Universe coalesced into the cosmic web we see today.

The quasar in question, SDSS J165202.64+172852.3, is an “extremely red” quasar that exists in the very early Universe, 11.5 billion years ago. Quasars are a rare, incredibly luminous type of active galactic nucleus (AGN). This quasar is one of the most powerful known galactic nuclei that’s been seen at such an extreme distance. Astronomers had speculated that the quasar’s extreme emission could cause a “galactic wind”, pushing free gas out of its host galaxy and possibly greatly influencing future star formation there.

An AGN is a compact region at the centre of a galaxy, which is emitting enough electromagnetic radiation to outshine all the galaxy’s stars. AGNs, including quasars, are powered by gas falling into a supermassive black hole at the centre of their galaxy. They typically emit vast amounts of light across all wavelengths, but this galactic core is a member of an unusually red class. In addition to its intrinsic red colour, the galaxy’s light has been further redshifted by its vast distance. That made Webb, having unparalleled sensitivity in infrared wavelengths, perfectly suited to examine the galaxy in detail.

To investigate the movement of the gas, dust and stellar material in the galaxy, the team used the telescope’s Near Infrared Spectrograph (NIRSpec). This powerful instrument can simultaneously gather spectra across the telescope’s whole field of view, instead of just from one point at a time – a technique known as integral field unit (IFU) spectroscopy. This enabled them to simultaneously examine the quasar, its galaxy and the wider surroundings.

Spectroscopy was critical to understand the movement of the various outflows and winds surrounding the quasar. The motions of the gases affect the light that they emit and reflect, causing it to be red- or blueshifted in proportion to their speed and direction [1]. The team was able to see and characterise this movement by tracking ionised oxygen in the NIRSpec spectra. The IFU observations were especially useful, with the team taking full advantage of the ability to collect spectra from a wide area around the quasar itself.

Previous studies by, among others, the NASA/ESA Hubble Space Telescope and the Near-Infrared Integral Field Spectrometer instrument on the Gemini-North telescope called attention to the quasar’s powerful outflows, and astronomers had speculated that its host galaxy could be merging with some unseen partner. But the team was not expecting Webb’s NIRSpec data to clearly indicate that they were not just looking at one galaxy, but at least three more swirling around it. Thanks to the IFU spectra over a broad area, the motions of all this surrounding material could be mapped, resulting in the conclusion that SDSS J165202.64+172852.3 was in fact part of a dense knot of galaxy formation.

There are few galaxy protoclusters known at this early time. It’s hard to find them, and very few have had time to form since the Big Bang,” said astronomer Dominika Wylezalek of Heidelberg University in Germany, who led the study into this quasar. “This may eventually help us understand how galaxies in dense environments evolve… It’s an exciting result.”

Using the IFU observations from NIRSpec, the team was able to confirm three galactic companions to this quasar and show how they are connected. Archive data from Hubble hints that there may be even more. Images from Hubble’s Wide Field Camera 3 had shown extended material surrounding the quasar and its galaxy, prompting its selection for this study into its outflow and the effects on its host galaxy. Now, the team suspects they could have been looking at the core of a whole cluster of galaxies – only now revealed by Webb’s crisp imaging.

"Our first look at the data quickly revealed clear signs of major interactions between the neighbouring galaxies,” shared team member Andrey Vayner of Johns Hopkins University in Baltimore, USA. “The sensitivity of the NIRSpec instrument was immediately apparent, and it was clear to me that we are in a new era of infrared spectroscopy."

The three confirmed galaxies are orbiting each other at incredibly high speeds, an indication that a great deal of mass is present. When combined with how closely they are packed into the region around this quasar, the team believes this marks one of the densest known areas of galaxy formation in the early Universe. “Even a dense knot of dark matter isn’t sufficient to explain it,” Wylezalek says. “We think we could be seeing a region where two massive halos of dark matter are merging together.”

The study conducted by Wylezalek’s team is part of Webb’s investigations into the early Universe. With its unprecedented ability to look back in time, the telescope is already being used to investigate how the first galaxies were formed and evolved, and how black holes formed and influenced the structure of the Universe. The team is planning follow-up observations into this unexpected galaxy proto-cluster, and hope to use it to understand how dense, chaotic galaxy clusters like this one form, and how it’s affected by the active, supermassive black hole at its heart.

They aim first to return to the question of galactic winds and quasar feedback. Quasars have long been suspected as the culprit of reduced star formation in their host galaxies by this feedback mechanism, but firm evidence to link the two has been difficult to come by. The present observations are just the first in a set which will study three quasars with Webb, each at different times in the past of the Universe.

“To disentangle the incredibly bright light of a distant quasar from the much dimmer host and its companions is almost impossible from the ground. Uncovering the details of the galactic winds that may produce feedback is even more challenging,” shared team member David Rupke of Rhodes College in Memphis, USA. “Now with Webb, we can already see that’s changing.”

This research was completed as part of Webb’s Early Release Science (ERS) Programs. These observations are taking place during the first 5 months of Webb science operations. The Webb observations that yielded this result were taken from the ERS program #1335.

[1] When light waves are emitted by a moving source, they can be squashed together or stretched apart from our perspective here on Earth, depending on the direction the source is moving. If a light source moves away from us, the stretching shifts its light into redder wavelengths, and if the source is moving towards us its light becomes bluer. This is known as the Doppler effect, analogous to how sound waves are shifted when emitted by a moving vehicle such as an ambulance. Light waves can also be redshifted because the space between it and us is expanding - so-called cosmological redshift.

These results will be published in the The Astrophysical Journal Letters. 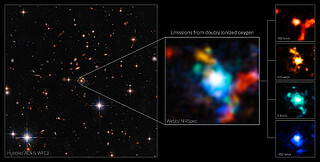 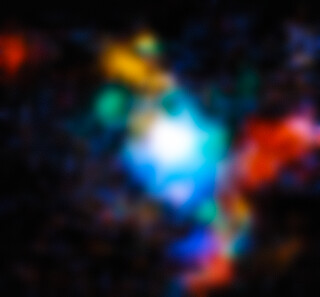 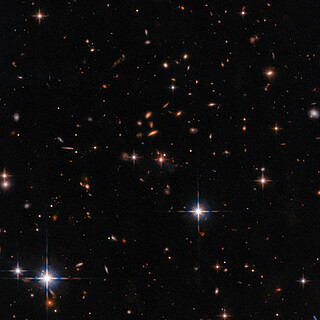