Here, the Webb Picture of the Month of merging galaxies IC 1623 A and B is juxtaposed with a new image from the NASA/ESA Hubble Space Telescope. This image on the left, combining data from Hubble’s ACS and WFC3 instruments, gives a familiar visible-light view of these colliding galaxies, where the centres of the individual galaxies are much more obscured by dark dust. Meanwhile, in Webb’s combined MIRI and NIRCam view of the galaxies on the right, the gas being used as fuel by the stellar nurseries is especially apparent. Webb’s ability to pierce the gaseous veil obscuring the bright galactic cores also causes prominent diffraction spikes to appear.

[Image description (left): The two galaxies are close in the centre, the core of one above and slightly to the left of the other. Their cores are pale blue and their spiral arms, which merge together between and around the cores, are nebulous. On top of the centre of the merger, there are many small star-forming regions that glow pink, and dust that is very dark. The background is black with many faint galaxies.]

[Image description (right): The two galaxies swirl into a single chaotic object in the centre. Long, blue spiral arms stretch vertically, faint at the edges. Hot gas spreads horizontally over that, mainly bright red with many small gold spots of star formation. The core of the merging galaxies is very bright and radiates eight large, golden diffraction spikes. The background is black, with many tiny galaxies in orange and blue.] 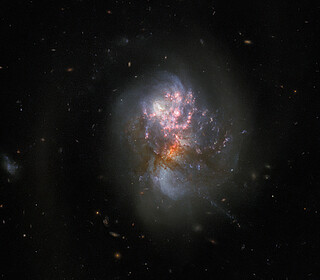 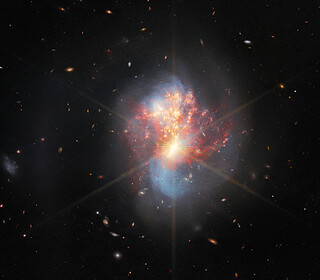