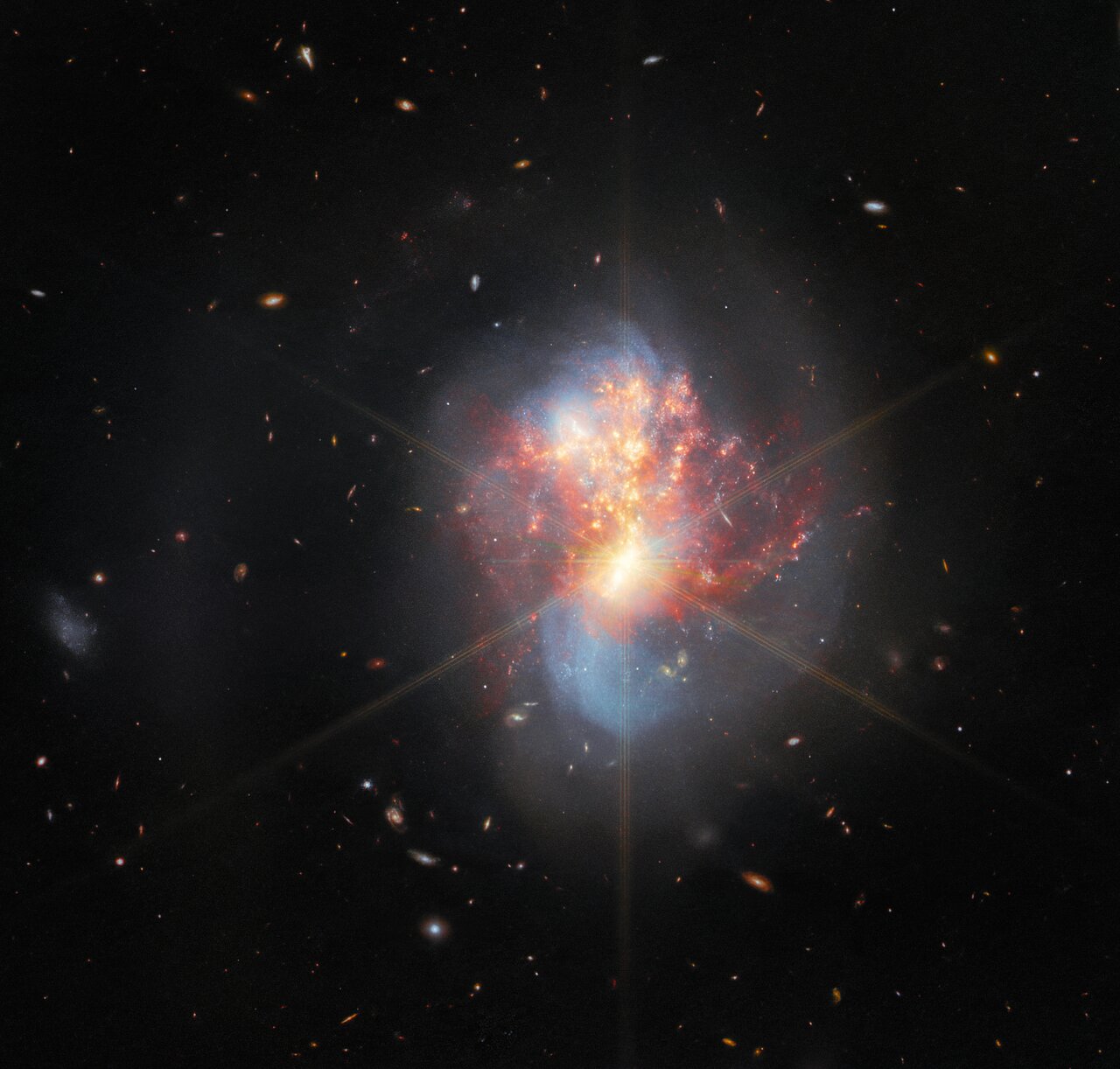 This image from the NASA/ESA/CSA James Webb Space Telescope depicts IC 1623, an entwined pair of interacting galaxies which lies around 270 million light-years from Earth in the constellation Cetus. The two galaxies in IC 1623 are plunging headlong into one another in a process known as a galaxy merger. Their collision has ignited a frenzied spate of star formation known as a starburst, creating new stars at a rate more than twenty times that of the Milky Way galaxy.

This interacting galaxy system is particularly bright at infrared wavelengths, making it a perfect proving ground for Webb’s ability to study luminous galaxies. A team of astronomers captured IC 1623 across the infrared portions of the electromagnetic spectrum using a trio of Webb’s cutting-edge scientific instruments: MIRI, NIRSpec, and NIRCam. In so doing, they provided an abundance of data that will allow the astronomical community at large to fully explore how Webb’s unprecedented capabilities will help to unravel the complex interactions in galactic ecosystems. These observations are also accompanied by data from other observatories, including the NASA/ESA Hubble Space Telescope, and will help set the stage for future observations of galactic systems with Webb.

The merger of these two galaxies has long been of interest to astronomers, and has previously been imaged by Hubble and by other space telescopes. The ongoing, extreme starburst causes intense infrared emission, and the merging galaxies may well be in the process of forming a supermassive black hole. A thick band of dust has blocked these valuable insights from the view of telescopes like Hubble. However, Webb’s infrared sensitivity and its impressive resolution at those wavelengths allows it to see past the dust and has resulted in the spectacular image above, a combination of MIRI and NIRCam imagery.

The luminous core of the galaxy merger turns out to be both very bright and highly compact, so much so that Webb’s diffraction spikes appear atop the galaxy in this image. The 8-pronged, snowflake-like diffraction spikes are created by the interaction of starlight with the physical structure of the telescope. The spiky quality of Webb’s observations is particularly noticeable in images containing bright stars, such as Webb’s first deep field image.

Results based on this observation of IC 1623 have been published in the Astrophysical Journal.

[Image description: The two galaxies swirl into a single chaotic object in the centre. Long, blue spiral arms stretch vertically, faint at the edges. Hot gas spreads horizontally over that, mainly bright red with many small gold spots of star formation. The core of the merging galaxies is very bright and radiates eight large, golden diffraction spikes. The background is black, with many tiny galaxies in orange and blue.]