Announcement of the 2023 ESA Hubble and Webb Calendar

To celebrate another year of exciting images and discoveries from the NASA/ESA Hubble Space Telescope, and the first year of operations with the NASA/ESA/CSA James Webb Space Telescope, ESA/Hubble and ESA/Webb have released a new calendar that showcases beautiful imagery from both missions for 2023.

The 2023 calendar features a selection of images from Press Releases (from Hubble and Webb), Hubble Pictures of the Week and Webb Pictures of the Month published throughout 2022. These include imagery of planets, star clusters, galaxies, and more. It can now be accessed electronically for anyone to print, share and enjoy (please see the links provided below).

The images featured in the calendar are as follows:

Cover: This landscape of mountains and valleys speckled with glittering stars is actually the edge of a nearby, young, star-forming region called NGC 3324 in the Carina Nebula. Captured in infrared light by the James Webb Space Telescope, this image reveals for the first time previously invisible regions of star birth.

January: The protostar L1527, shown in this image from the James Webb Space Telescope, is embedded within a cloud of material that is feeding its growth. Material ejected from the star has cleared out cavities above and below it, whose boundaries glow orange and blue in this infrared view.

March: In this mosaic image stretching 340 light-years across, the James Webb Space Telescope showcases the Tarantula Nebula star-forming region in infrared light, including tens of thousands of previously unseen young stars that are obscured by cosmic dust in visible-light images.

May: Two views from the James Webb Space Telescope reveal the planetary nebula NGC 3132, also known as the Southern Ring. The left image is a sharp near-infrared view of the nebula, while the view on the right is in mid-infrared wavelengths, and captures the dust shrouding one of the white dwarf stars at the nebula’s centre.

June: Jupiter, the largest planet in our Solar System, is featured here in near-infrared wavelengths as seen by the James Webb Space Telescope. Different colours mark the light from the planet’s aurorae, and the clouds and hazes at different depths in the atmosphere. The Great Red Spot shines brightly with reflected near-infrared light from the Sun.

September: This celestial cloudscape from the Hubble Space Telescope captures the colourful region surrounding the Herbig-Haro object HH 505. The Orion Nebula is awash in intense ultraviolet radiation from bright young stars. Outflows from such stars collide with gas and dust, creating the shockwaves known as Herbig-Haro objects that are brightly visible to Hubble.

October: This montage features three views of M74, also known as the Phantom Galaxy. The left section of this image is a visible-light image from the Hubble Space Telescope, while the right section, in mid-infrared wavelengths, comes from the James Webb Space Telescope. In the centre, data from both telescopes are combined for a truly unique view into the heart of the object.

November: Two views of the famous Pillars of Creation, part of the Eagle Nebula, are revealed here by the James Webb Space Telescope. The left, mid-infrared, image details the spread of interstellar dust. On the right, the near-infrared image highlights bright, newly-formed stars.

December: NGC 7038 is displayed in glorious detail here by the Hubble Space Telescope. The image is remarkably detailed, combining over 15 hours of observations to expose distant stars and galaxies in the background. The spiral galaxy filling the frame here contains celestial objects that can be used to measure distances on cosmic scales. 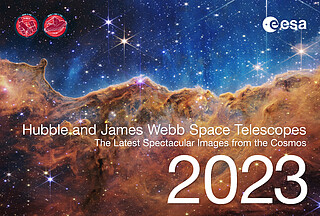